That of the goldsmith is an age-old and challenging art that requires skill and precision but above all, love. Based on this premise, Gaetano Broggi, the last heir in a family of artisans who were experts in “gilding and silvering metals”, opened his first workshop in Via dei Mercanti d’Oro in Milan, in 1818.

The fame of his cutlery, flatware and sacred objects in silver reached the royal court of Turin, so much so that in 1841 the Duke of Savoy commissioned the Milanese artisan to gild the ornaments for his wedding.

While gilding and silvering were still done manually, Gaetano’s sons, Carlo and Serafino, decided to travel abroad to study the latest innovations in the sector. It was there that they experimented with the galvanic process, which involved considerable savings in terms of time and resources, thus increasing production and refining the qualitative aspects, to the delight of their traditional noble clientele and the new bourgeoisie.

It was 1866 and the company Gaetano Broggi e Figli inaugurated its new headquarters in S. Maria Fulcorina, where metalworking was combined with the production of flatware and cutlery. It was here that the silver alloy that soon made Broggi’s name famous throughout the world was created: a special amalgam capable of combining shine, extraordinary strength and significantly lower costs.

The Broggi company continued to grow until it moved to Piazza San Marco where, for the first time in Italy, Broggi began making cutlery and turning oval objects.

On June 14, 1872, Victor Emmanuel II granted the right to insert the royal crest on the sign of the headquarters as a supplier of the Royal Household. Just a few years later, a new innovation: Broggi discovered the dynamo for producing electricity and brought it to Italy to optimise the galvanic process. Soon the challenge of large supplies began for the family, starting with the hotel sector.

In 1875 the Broggi family were asked to create an original model of cutlery for the new Hotel Confortable opened in Milan by Marquis Flori. This was followed by orders for several other establishments.

In 1884 Broggi became supplier of cutlery and flatware for the canteens of the officers and non-commissioned officers of the Italian Royal Navy and in 1886 was given the Professor Brambilla award by the Royal Lombard Institute of Science and Literature “for having introduced the silverware industry into Italy and for having been able to lead it to such proportions and to such perfection as to actually bring a real and proven advantage to the country ”.

Thus, the time came to shift horizons, by focusing interest on international markets. In 1888 the company moved to its current location in Via Fratelli Broggi, while simultaneously opening its store in Corso Vittorio Emanuele.

In 1906 Broggi became a share company, without ever losing the family spirit and the authentic passion from which this 200-year-long adventure was born. Meanwhile, collaboration with officials of the Italian Line shipping company increased maritime supplies.
But Broggi is not just silverware. The company’s inclination towards innovation and research opened the doors to an important new field of production: stainless steel, which at the time was widely used in the hospital sector.

Production of stainless-steel cutlery began in 1950.
Following the post-war crisis, as demand grew, Broggi built a huge factory to upgrade production and respond to foreign markets.

In the meantime, goods designed by Broggi began to be widely used on the most elegant tables throughout Italy.
In 1993 the company was acquired by the Bertoli family, already owner of the Abert group, whose family tradition has skilully brought out the nature of the company.

Broggi thus continues its journey, while benefitting from new structures and strategic tools to ensure that it keeps up to date with the demands of the market.

Constant research into innovative designs, quality that is “made in Italy” and know-how are still the guarantee of success for the company at national level, where it is a leader in the sector, and on the international scene, thanks to its presence in 80 countries with important orders for luxury hotel chains, Michelin star rated restaurants and shipping companies.

Our history at your service.

The search for beauty and elegance, combining innovation and tradition, to bring your desires to the table.

Transferring our great passion to the objects we create, to give value to the needs of every client and to help them find something unique, even with customised projects. 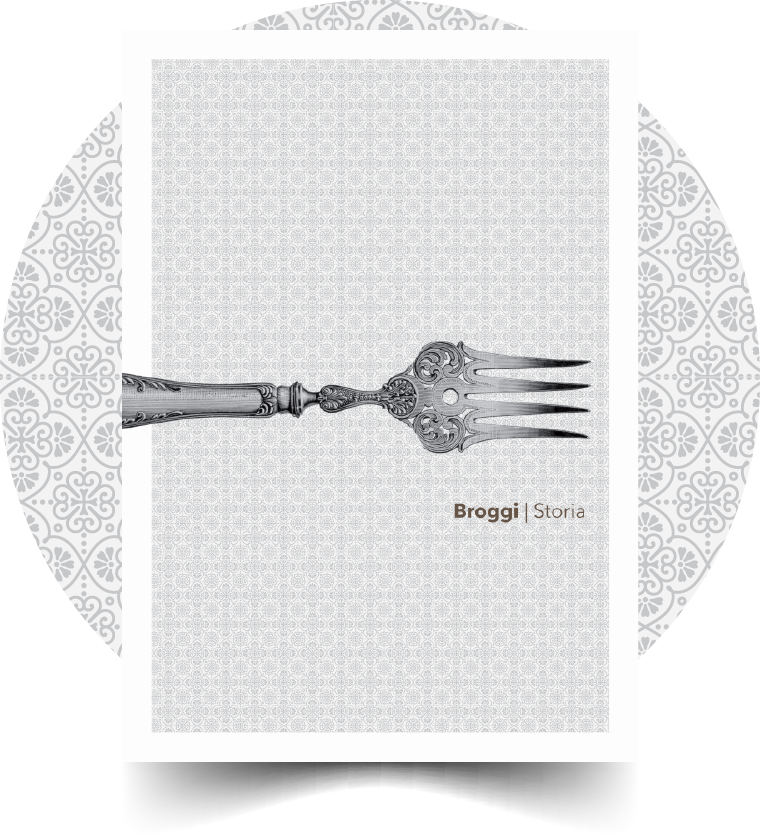